Gazprom flings the gauntlet to USA

Gazprom, Russia’s natural gas monopoly, with the help of the Akademik Chersky pipe-laying vessel, is going to build the remaining 160 km of Nord Stream-2 gas pipeline. This is a challenge for the United States. 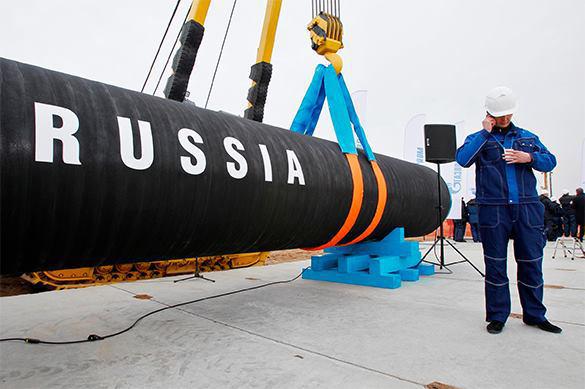 The Akademik Chersky pipe-layer is currently anchored in the German port of Mukran, where it is being loaded with pipes for Nord Stream-2, Bloomberg reports.

The agency substantiates its point with satellite images of the ship off the port of Mukran. The photos, published by Planet Labs Inc., show that sections of the gas pipeline, which were in storage near the harbor, have been moved to the pier for loading. Thus, the agency concludes, Gazprom is moving the construction of the Trans-Baltic gas pipeline to the final stage.

One shall assume that there is very little time left before the works to start the construction of the Nord Stream 2. Most likely, the works will resume in late May or in early June.

Gazprom is running the risk of falling under heavy sanctions

The pipelayer had made a very intricate and long way to reach the port of its destination. Supposedly, the route was longer than needed to give Gazprom an opportunity to think about the consequences in the form of US sanctions.

At the first stage, it goes about the complete blockage of all US assets of the company, a ban on operations with them, as well as a ban on the entry of company representatives to the US. It was because of such threats that forced Swiss company Allseas Group SA to suspend the work and recall its vessels from the Baltic Sea.

At the second stage, Gazprom may lose many of its partners in other projects due to secondary sanctions that could be imposed on them. The Russian gas giant may lose funding in US dollars too. All this may happen at a time when the company, for the first time in its history, recorded losses in the first quarter of 2020 due to a decline in natural gas prices.

To complete the construction of the gas pipeline, one needs to lay 160 kilometers of pipes. The Nord Stream 2 operator announced an intention to complete the project as soon as possible.

Sanctions do not make a reason to abandon Nord Stream 2

Aleksey Grivach, Deputy Director General for Gas Issues of the National Energy Security Fund, told Pravda.Ru that Gazprom had seen sanctions against its subsidiaries in the past, so this is not a reason for the company to stop working on its strategic projects. The purpose of those projects is to strengthen both Russia’s energy security and energy security between Russia and Europe, let alone Gazprom’s businesses for many years to come.

"The completion of Nord Stream-2 is a matter of principle for Gazprom, for Russia, and for Europe. USA’s unprincipled interference in the energy policy of Russia and Europe goes beyond limits of decency," said Alexey Grivach.

The expert believes that Gazprom does not have property in the USA, and if it does, then "they have most likely re-registered all of that property."

“Even if they block the activities of Gazprom subsidiary companies in the USA, Gazprom will work through other subsidiaries,” concluded Alexey Grivach.

When Washington imposed sanctions on Rosneft’s Swiss daughter, TNK Trading International S.A. (TTI) because the company was operating in the oil sector of the Venezuelan economy," it was decided to transfer all of its assets in Venezuela to the newly created state-owned company  "Roszarubezhneft.” The latter is fully owned by the Federal Property Management Agency of Russia.

In addition, Gazprombank transferred to the Federal Property Management Agency the blocking shareholding (25% plus one share) of the sanctioned Eurofinance Mosnarbank, which works with Venezuela.

A state body as a shareholder is less vulnerable to any political and economic risks as it might be considered an act of aggression and even a declaration of war. The state owns Gazprom’s controlling stake - 50.23% (the Federal Property Management Agency owns 38%), which makes the natural gas monopoly a state-owned enterprise. As a response to sanctions against the Russian state, the Russian parliament, the Duma, discussed a ban for US-based companies (Pepsi, McDonald's, etc.) to conduct activities in Russia.