Russian businessman erects monument to Stalin on his property

In the town of Bor, the Nizhny Novgorod region, a monument to Joseph Stalin was unveiled. The monument, which is the first monument to Stalin in the region, was unveiled on June 24, when Russia was holding the Victory Parade, which was earlier rescheduled from its traditional day of May 9th due to the coronavirus pandemic. 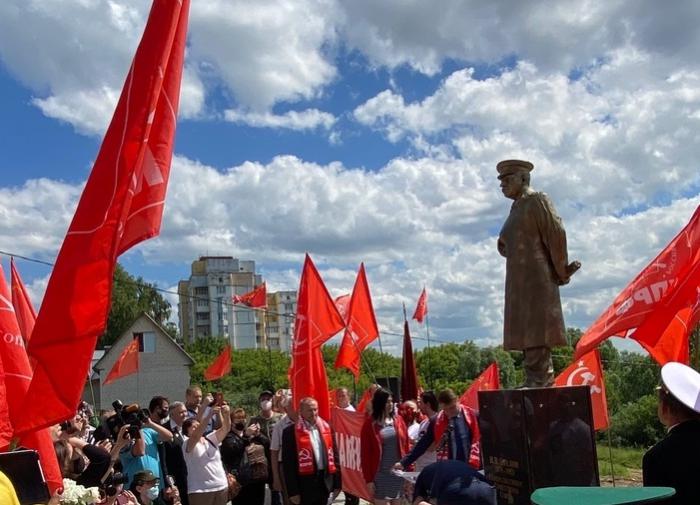 As many as 400 people of different ages took part in the ceremony. Many laid flowers at the foot of the monument. The opening ceremony was held with the anthem of the Soviet Union playing in the background.

The statue is made of concrete and painted in bronze color. "The Generalissimo of the Soviet Union," as the inscription on the pedestal says, is depicted in full height wearing an overcoat and a cap. The height of the monument with its pedestal is about three meters.

The head of the local branch of the Communist Party of the Russian Federation, businessman Aleksei Zorov, masterminded the idea of the monument to Stalin. The monument was erected on his private territory at his own expense. He did not give the name of the sculptor, but only said that the monument was made in Moscow. The businessman did not expose the cost of the project either - this is a "commercial secret." There is a fence around the monument so access to it can be restricted.

In the future, Zorov intends to build the "Stalin Center" near the monument - a residential building with a museum of achievements of the Soviet era on the ground floor.

"Stalin symbolizes the might and grandeur of the power that had ensured peace on the planet and saved, in fact, the world from the Third World War," Zorov said.

According to the entrepreneur, the monument stands as a symbol of the fight against corruption in the town of Bor.

"It should have been erected near the city administration, so that every official, when they go to work or from work, get scringed inside," Zorov said.

Communists had long been trying to push through a decision to erect a statue of Stalin through the local administration. The authorities of the municipality consider the monument to be unlawful, since the permitted type for the use of the plot of land, where the statue stands is individual housing construction. The installation of memorial signs and complexes stipulates for  the development of a concept that should be agreed upon by the executive body of local self-government. The local authorities appealed to the police with a request to look into the situation and give a legal assessment to it.